The Top Blockchains for NFTs

Since NFTs took off in 2021, we’ve seen the creation of exclusive NFT clubs, record-breaking purchases, and the establishment of wildly successful NFT creations and marketplaces.

This growth has allowed artists, developers, and traders to flourish on the blockchain. It has also inspired many enthusiasts to launch their own NFT collections. If you’re one such artist or developer, choosing which blockchain to run your project on is one of the most critical decisions you’ll have to make.

The Best Blockchains for Your NFT Project

Ethereum is the largest and most popular blockchain for NFTs (and all DeFi applications). It’s the protocol behind the ERC-721 token, a standard commonly used to create NFTs. It forms the foundation for most existing NFTs, and many more upcoming projects plan on using it.

Some of the most popular NFT collections are on the Ethereum blockchain. These include the Bored Ape Yacht Club (BAYC), Otherdeed for Otherside, Crypto Punks, Doodles, Clone X, and newer collections like Moonbirds and Goblin Town.

However, the Ethereum blockchain has weaknesses stemming from its Proof-of-Work (PoW) consensus mechanism. Here, computers compete to solve complex puzzles in order to add blocks of transactions to the blockchain. These puzzles are incredibly complex and take a lot of energy and power to solve, making Ethereum one of the most energy-intensive blockchains.

Conducting a transaction on Ethereum can be problematic due to its current abilities. As popular as it is, transactions can take a while to go through due to mass usage. The gas fees can also be quite high; they can range anywhere from $10 to $70+, depending on current network congestion.

Fortunately, the Ethereum 2.0 (ETH2 or Serenity) upgrade, slated for August 2022, promises some huge changes. It will see the blockchain change to a Proof-of-Stake (PoS) consensus, which is much more energy-efficient. It will also support faster transactions through the implementation of sharding further down the line, eliminating these common problems over time.

That may get pushed back, though. Certain aspects of the upgrade have been lagging. Currently, the next implementation is hopeful for August, but recent market volatility suggests that anything could happen. Time will tell.

Solana is a relatively new blockchain. However, it has earned a reputation as one of the fastest programmable blockchains. This has attracted a lot of minting, allowing it to compete with Ethereum in daily sales and recently even beating the popular network in monthly NFT trading volume for the first time ever.

If you’re looking for a blockchain with low gas fees and quick transactions, you should consider Solana for your projects.

Still, Solana has yet to attain the levels of popularity that Ethereum has. It has also been criticized for not being decentralized enough. A few times now, Solana has halted activity on its blockchain. This very centralized behavior has not sat well with the crypto world.

Minting NFTs on Immutable X ensures that you incur no fees in peer-to-peer transactions. The layer 2 network is much faster, with transaction fees of up to 9,000 transactions per second (TPS). Also, it’s pretty scalable, as you won’t have to deal with network congestion. Immutable X runs a marketplace for developers to trade NFTs. This marketplace has lowered the barrier to entry for small artists and developers. Still, the blockchain is capable of generating a lot of hype, as shown in its most recent big launch, the Illuvium Land Sale.

Within 72 hours of its launch, Illuvium has gone on to become one of the most successful NFT sales in history. The project sold out 20,000 land plots worth a collective $76 million. NFTrade will soon support Immutable X as its first layer 2 network integration.

The Binance Smart Chain (BSC) was released in 2020 and quickly became a popular Ethereum alternative. Now referred to as the BNB Chain after a recent rebranding, it specializes in smart-contract-based applications and uses its own token standards, BEP-721 and BEP-1155, that allow for the creation of NFTs.

These standards are compatible with the Ethereum Virtual Machine (EVM); thus, the BNB Chain network can support Ethereum dApps and tools, allowing developers to import projects from the Ethereum blockchain with ease. The most anticipated NFT projects on the BNB Chain are in the gaming and marketplace sectors, which require high transaction rates with low fees, which BNB Chain currently enables.

If you’re looking for a fast and affordable blockchain for your project, BNB Chain is a good option.

The Avalanche (AVAX) blockchain is one of the fastest smart contract platforms currently available. It is powered by several consensus mechanisms focusing on scalability, usability, and interoperability. Regarding NFTs, AVAX charges low gas fees and offers quick transaction speeds thanks to its Proof-of-Stake (PoS) protocol. For example, it is possible to mint NFTs for way less than a dollar. Like other PoS blockchains, it has a very small carbon footprint.

On the flip side, Avalanche has three separate chains, X, C, and P, making its user experience a bit complicated. And unlike other blockchains, it doesn’t penalize validators (slashing) for engaging in fraudulent or other negative behavior. NFTs on Avalanche are all on the C-Chain, the same Avalanche network that MetaMask supports, so once you get used to it, Avalanche is no harder to use than other networks. The Avalanche community has begun to see many high quality games and profile picture (pfp) collections come to its network, which should continue to grow.

Polygon is another Layer 2 solution for Ethereum. It has been used to create various NFT projects that have sold well on OpenSea and other NFT marketplaces. These include NFTs like The Martians, ZED Run, Chumbi Valley Official, Genesis Kosmos, and more. The blockchain allows developers to build scalable solutions using smart contracts. It is compatible with EVM while allowing for faster transactions and lower gas fees. You can also mint and sell Polygon NFTs on OpenSea and other marketplaces like NFTrade. For these reasons, more and more NFT projects are being built on the Polygon Network.

However, many people are still unfamiliar with Polygon. Thus, few people may be willing to buy NFTs built with Polygon, especially considering that using Polygon for the first time can be challenging for beginners.

NFTs have become a huge part of the blockchain ecosystem. They’ve been quickly adopted by artists, developers, and both small and large-scale businesses to help generate community interest and new revenue opportunities. If you’re thinking of following the same path, take the time to choose the best blockchain for your NFT campaign.

Your choice largely depends on your needs. For example, Ethereum offers a secure, decentralized, and popular platform. On the other hand, alternatives like Solana and BNB Chain give you low gas fees and fast transaction fees, but have their own tradeoffs.

NFTrade is a decentralized multi-chain and blockchain-agnostic NFT platform. NFTrade is an indexer of all NFTs across all of their integrated chains, hosting the complete NFT lifecycle and allowing anyone to seamlessly create, buy, sell, swap, farm, and leverage NFTs across different blockchains. Using NFTrade, anyone can gain access to the entirety of their NFT, unlocking the total value of the NFT market. 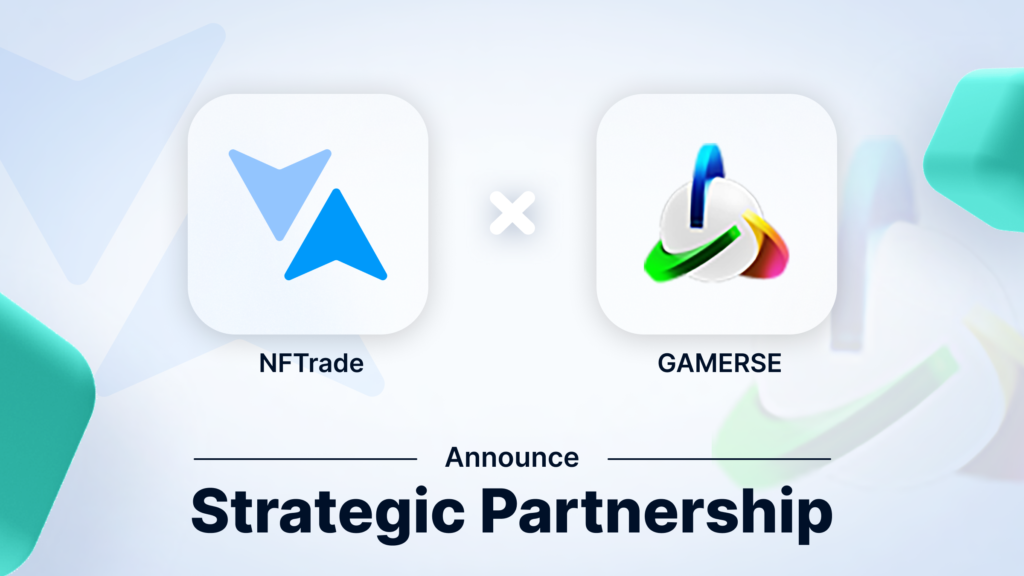 Partnership announcement between NFTrade and Gamerse. NFTrade partners with ZenGo, a top-rated crypto wallet, to secure storage for NFT collectors. Buy, sell, and store your NFTs with confidence using NFTrade and ZenGo.