The International Interest In NFTs

From all the talk of NBA Top Shot, CryptoPunks, Beeple purchases, and other NFT-related news and investments, it may seem that the American and western market dominates NFTs, but evidently, this is not the case. Like the cryptocurrency market that helped first establish NFTs, NFTs are a broad and international asset class with interested users from all across the globe. In fact, the USA, which is a dominant force in crypto and the leading global financial superpower, comes in as the fourth most interested region in NFTs, with a few surprising countries in front of it. The decentralized nature of cryptographic assets is apparent within the NFT market.

Many factors go into measuring a country’s interest in NFTs, but in such a broad market, one of the best ways to gauge interest is through the use of the trusted Google Trends explorer. Through this explorer, we can aggregate data on which countries are most interested in NFTs, as well as the ‘size’ of their interest when compared to the population of other countries. For anyone who thought the USA would come out in front, you are mistaken, but it may not come as a surprise that the leader is from the Asian market. With some of the most technologically advanced applications already adopted by their population, such as widespread use of digital currency through apps like WeChat and AliPay, China is leading the interest when it comes to NFTs.

Based on Google Trend metrics, the most interested countries in NFTs are China, Canada, Singapore, the United States, and Australia. Following the top five, we see Hong Kong, South Korea, New Zealand, Slovenia, and Lebanon, representing a broad geographical base of involved users. The interest comes from all over the world, with China and its large population leading the way. For many of us focusing on the movement of western markets in regards to cryptocurrencies, we may tend to ignore players like China and countries in South East Asia, which are known to be fast adopters of new technologies. For every artist like Beeple or Mad Dog Jones, there are potentially multiple Chinese and Asian counterparts that have not yet had their time in the spotlight, but with vast interest from these regions, it is sure to come.

Top five most interested regions for the search term “NFT” in the last year (trends.google.com)

A Slow Down Doesn’t Mean a Stop

When looking at this aggregated data, we can also see that the interest in NFTs has begun to wane across the board after peaking in February 2021, but this isn’t something that should scare long-term believers in the technology. Just like with Bitcoin, Ethereum, DeFi, and other cryptocurrencies and applications in general, interest will increase and decrease alongside market cycles, booming and ‘busting’ along the way. For example, look at DEXs now versus just a few years ago. In 2017, projects like Kyber were at the forefront, but fell off after the early 2018 price crash, and now, Uniswap is one of the leading applications throughout the entire blockchain market.

Global interest over the last year for the term “NFT” (trends.google.com)

However, with all the international attention NFTs are receiving, it’d be wrong to categorize this asset class as facing a bear market. This is partially evident in the strong interest (despite a recent decrease) in NFTs, potential record-breaking NFT sales, and the continuous building of NFT infrastructure on top of multiple blockchains. To even say the NFT market is in a lull would be disingenuous, as you just have to look back a year or two and compare the current NFT economy with years past to see the massive growth. When you zoom out to the big picture, taking into consideration the continued global awareness around the NFT asset class, the future path of the NFT market is clear to those who are looking. 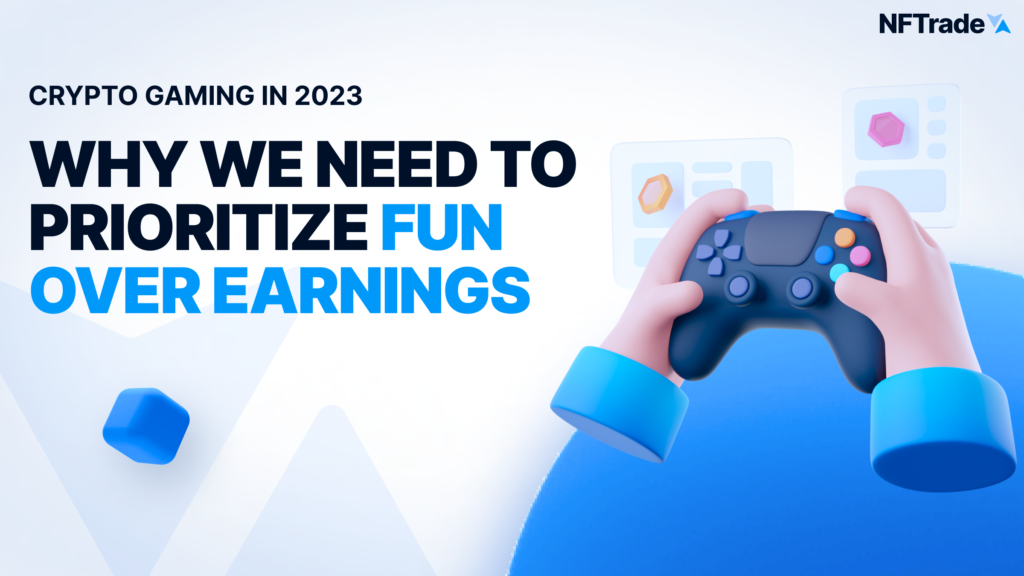 The hype around NFT gaming is real, but why has it not materialized yet? We dive headfirst into this topic. NFTrade announces partnership with The Lost Glitches, a game that offers players the ability to choose their syndicate, build their deck, and gain experience to improve their character’s skills and equipment.