The token generation event (TGE) for every project is a significant event, as it sets the standard and precedent of what users can expect from the project in the future. Although this doesn’t precisely define the ultimate success of a project, a fluid TGE is one of the first steps to establishing an active and growing user base. At NFTrade, we are community-focused, and with this in mind, we want our governance and utility token to be spread as evenly as possible across the entirety of the cryptocurrency market.

Having a mass amount of tokens concentrated into the hands of wealthy VCs doesn’t help the community or platform, which has led us to concentrate on end user empowerment. Based on these convictions, our TGE and initial DEX offering (IDO) will take place across a record-breaking NINE launchpads, two to three times more launchpads than other projects have involved themselves with before.

Focusing on Getting NFTs in the Hands of the Community

By expanding beyond the accepted model of launching on one, two, or maybe three launchpads, we plan to get our utility token into as many end users’ hands as possible. We understand that different launchpads offer different benefits to users, and that not all launchpads supporters are guaranteed allocations in up-and-coming projects, so we are doing what we can to spread out our token launch to as many potential token holders as possible.

Since the ICO boom of 2017, the market has witnessed firsthand how token raises can go. Many scenarios end with massive raises that do not pan out to user expectations (how did EOS spend the $4 billion in funds it raised again?). That has led to more conservative launches, with launchpads coming in to decentralize the investing space and give everyday users the ability to get into high-potential projects at the ground floor level. After the lessons learned from 2017, many projects are raising most of their funds privately through venture capital, leaving scraps to a small sub-sector of users lucky enough to get in on an allocation at the base asset price.

This process leads to the concentration of tokens amongst a few high net worth investors looking to dump the token after seeing a high return on launch price, leaving the community as bag holders as the initial investors get out with a profit. We are flipping this model on its head, prioritizing small users over VCs. By offering a substantial token allocation across nine launchpads, we can better guarantee that the majority of released tokens get into the hands of the community.

To show that we genuinely respect the community and their involvement, all metrics, from initial token price to token vesting period, will be the same regardless of the type of investor. Of course, we have venture capital and hedge funds involved in our fundraising, but all of our token holders will receive their tokens at the same price of $0.10, and all will have the same vesting period. By spreading out allocation across various communities and getting everyone involved at the same base price, we feel this is the fairest and most equitable way for NFTrade to release tokens and raise funds.

In the end, we want long-term success, not an overnight pump and dump, so we have decided to implement this course of action for the $NFTD token sale. After analyzing hundreds (if not thousands) of token sales over the past years, our team and advisors have weighed the pros and cons and concluded this is the best potential pathway for success and long-term asset value preservation.

That being said, we are always looking to prioritize the customer and end user experience at NFTrade, so that means getting the platform’s utility token into the hands of as many end users and community members as possible. By holding an IDO across nine distinct platforms, we think we accomplish this goal of fair distribution and asset dissemination. Discover NFTrade 2.0, the upgraded NFT marketplace with new advanced features. Get the most out of your NFT trading experience with the new NFTrade! NFTrade announces its partnership with HYVE, a global freelance platform, allowing freelancers to earn and pay with $NFTD. 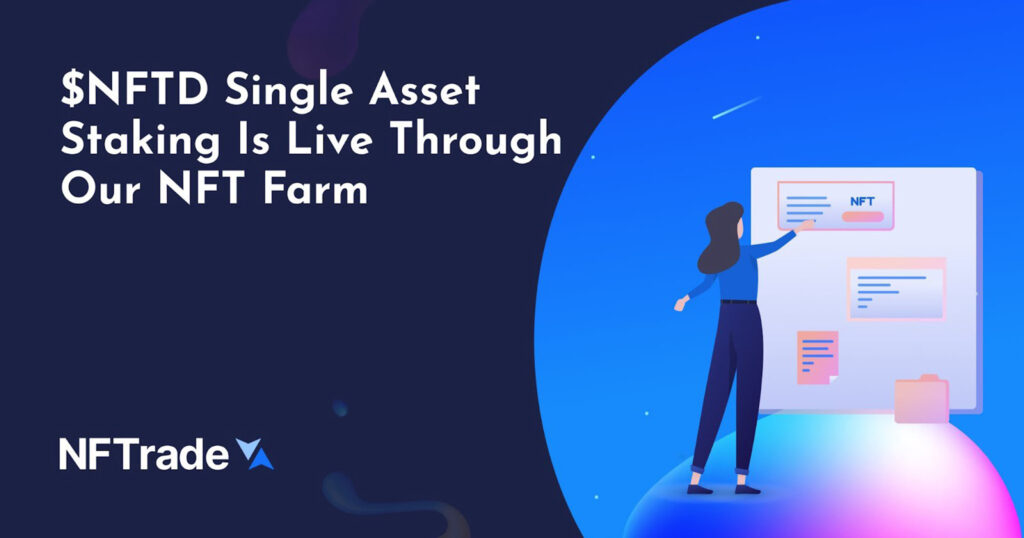 $NFTD Single Asset Staking Is Live Through Our NFT Farm